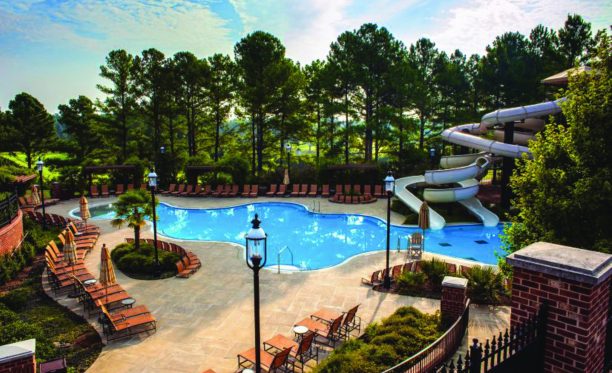 Family friendly, casual and stylish: Clubs are revamping their clubhouses to attract new and younger members.

For any business to prosper, it must adapt to the changing tastes and lifestyles of customers. And the club industry is no exception. What worked 20 years ago, might not be relevant today.

That’s one reason foresighted clubs are continually revitalizing their facilities to prepare for their next generation. In collaboration with master planners and architects, clubs with an eye on the future are adding family friendly attractions and giving their facilities stylish makeovers to adapt to contemporary lifestyles.

For more than a decade, one of the most desirable country clubs in the Carolinas has been funding modernizations designed to provide youthful activities.

Carmel Country Club, a full-service, 1,450-member club, aims to attract members who want what General Manager John Schultz, CCM, CCE, calls an expeiential lifestyle. Those people are invariably young. Carmel’s new members are, on average, 41 years old. And they value energy. So when prospects are on a tour, the club showcases all the activity that takes place on its grounds: kids splashing in water, groups gathering for tennis, golf carts arriving at the clubhouse.

“To drive membership, you need to create experiences that bring people out,” he said. “The more we do, the more we attract.”

With Schultz’s strategy in mind, Carmel strives to ensure that its major amenities are hubs of action for athletic activities and social events. Working off a strategic improvement program created in 2006, the club has renovated both of its 18-hole golf courses, added a golf short- game practice area, unveiled an expanded fitness center, redesigned its tennis center and revamped its restaurants.

The club’s primary recreational attraction, however, is its resort style pool complex, which opened to record attendance in 2008 and remains the members’ favorite outdoor hangout. The complex was designed for family enjoyment, with water slides, diving boards, chaise lounges, cabanas, food service, a tiki bar and enough elbow room for barbecues, birthday parties and live music. Most importantly, it serves as a gathering place, where kids and parents find friends and make memories.

The pool complex cost $5 million, an expenditure that at the time was viewed by some as reckless. But the gamble paid off, even before it opened. After the pool complex was announced, Carmel added 131 new members, banked $5 million in initiation fees and grew social member- ships from 30 to 130.

“If a club’s target is a couple between the ages of 35 and 45, a pool may be the best investment it can make,” said Vain of the McMahon Group.

Atlanta-based Johnson Studio, a firm that typically works on high end, destination worthy restaurants, oversaw the $3.5-million overhaul. Schultz felt that Johnson was uniquely qualified to set a casual but upscale design tone that would invite the next generation to relax, recharge and reconnect.

“We wanted the zing and feel of the restaurants our members enjoy when they Carmel Country Club renovated both of its 18-hole golf courses and added a resort style pool complex featuring water slides. go out on the town,” he said.

It was another risky choice that paid off. Schultz reports that restaurant activity increased by 50 percent in the year following the unveiling, and the numbers haven’t fallen since.

Even better, Carmel’s makeovers have helped to lower its average member age to 52 – six years younger than that of the typical U.S. club – and to boost its initiation fee to $75,000.