Why It Is All About “Very” Satisfied Members and Why Every Club Should Strive For The “Very Satisfied, the Holy Grail of Club Success”. After 37 years of serving thousands of clubs and surveying hundreds of thousands of members and spouses, some remarkable truths have become self-evident. Nothing points to club success like having the majority of all members not just “satisfied” but “very satisfied”. This should be the goal of every club board and manager. Read below to find out why.

The McMahon Group begins most surveys of club memberships by asking members to rate their overall satisfaction with their club using a rating scale from 1 to 5 (1 = very dissatisfied, 2 = dissatisfied, 3 = neutral, 4 = satisfied, 5 = very satisfied).  The results from the most recent 83,000+ members surveyed show that 40% of members of private clubs are “very” satisfied with their club and 49% are satisfied, with the balance (11%) either as neutral or dissatisfied to some extent.

Given that membership in a private club is indeed a luxury, of course it is not acceptable to have members that are either neutral or dissatisfied with their overall club experience. Unless something changes, these members are likely to question the value of their membership going forward and are likely to leave the club. However, clubs should not rest on their laurels just by having a high percentage of satisfied members. The goal should be to maximize the percentage of “very” satisfied members.

A deeper dive into the survey data as shown on the following “Receive Good Value” bar chart reveals that “very” satisfied members are much more likely to feel they are receiving good value for their memberships than those who are just “satisfied”. Almost half (47%) of members who are “very” satisfied with their clubs “strongly” agree they receive good membership value, compared to only 6% of members who are just satisfied with their overall club experience. This is almost eight-fold higher and shows why clubs should be striving not for just satisfied members, but for the “very” satisfied. 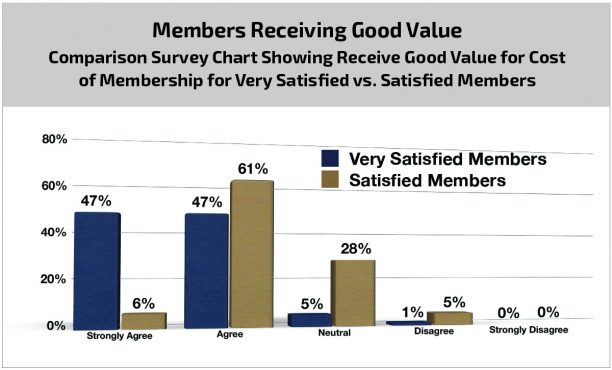 Willingness to Recommend Membership to Others 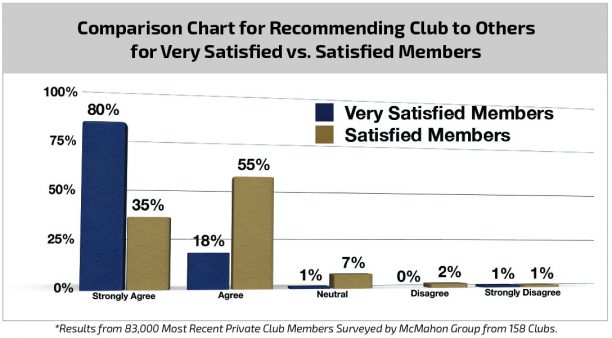 The chart to the right shows the satisfaction ratings with various club activities and facilities by the two most important membership groups of members who are “very” satisfied with their clubs and those who are just satisfied.  As this chart shows, there is not just one activity or facility that drives higher member satisfaction in a club. But across the board members who are “very” satisfied with the club have higher satisfaction with individual activities and facilities. However, the highest differential mean ratings are shown at the top of the chart for member dining (0.7), the clubhouse facilities (0.6), golf (0.5), club social activities (0.5) and golf practice facilities (0.4).

Therefore, if the goal of a club is to increase the percentage of its members who overall are “very” satisfied with their club, the first place clubs should start is to make improvements to these top five activities and facilities, and in particular improvements related to member dining and the clubhouse facilities are most important. 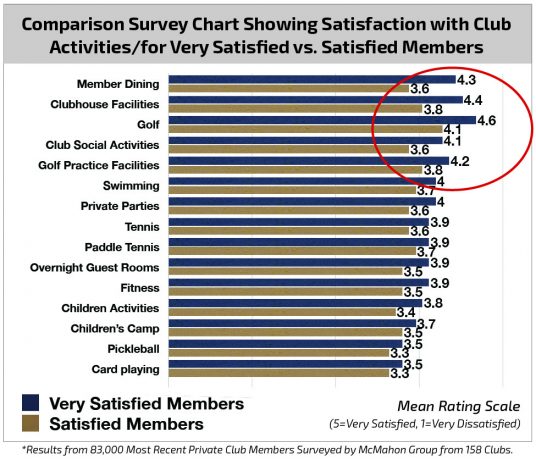 Hailing from the Los Angeles area, Tom left sunny Southern California at the ripe old age of 17 to attend the United States Military Academy at West Point.  After graduating with a degree in Civil Engineering, he spent 11 years on active duty in the Army and then another 11 years in the Army Reserves, eventually retiring at the rank of Lieutenant Colonel.  Along the way, Tom earned a Master’s Degree in Hotel & Restaurant Management from Florida International University in Miami.  During his 22-years in the Army, he had a chance to see the world, with assignments in South Korea, Germany, the Pentagon, Virginia, Indiana, Florida, Alabama, Maryland and Washington state.

Tom has been with the McMahon Group since 1990, serving as head of the survey and market research division.  During that time, he has worked with over 1,500 private clubs on a wide variety of survey and research projects, achieving the rank of “Survey Guru” at McMahon.

Over the years, Tom has been a jack of many sports – golf, tennis, racquetball, squash, water skiing, snow skiing, running – but a master of none.  His current pastime passions are gardening, cycling and nature photography – often combining the latter two on rides at a lake near his home in suburban St. Louis.

Tom and his wife Marlene have two children in their 20’s.  Katy is an artist working at an animation studio in Portland, Oregon, and Marcus is studying Mechanical Engineering at Cal Poly San Luis Obispo.