Developing important club improvement projects is always a challenge for a Club’s leadership. Many hours of work by the Board, Manager and Planning Committee are spent developing a Member Survey, a Master Plan and finally presenting a needed project to the members. But when it is all said and done, the last step is the most important for getting project approval. It is the Facility Approval Survey (FAS). This is the ultimate step in presenting and winning approval of a project where the proposed project becomes the Members’ plan. Where ultimate buy-in occurs. Where the Members select what they will vote for.

Instead of Members voting on a major project after its first presentation, a project brochure and FAS questionnaire is sent to all members online and mailed in print format for members to read and study before completing the questionnaire. The FAS acts as a straw poll on these major aspects of the proposed project:

From the results of the FAS, a Club learns what projects Members favor, how much they are willing to pay for them and which parts, if not all of them, the Members will approve.  The FAS adds six weeks to a project’s approval time, and all but assures Member support and approval. It is the secret for getting major facility projects approved, saves thousands of dollars in fees, and eliminates much wasted time and frustration in getting the right projects approved the first time they are presented.  Be sure to use the McMahon FAS on your next project.

Bill is a private club planner providing strategic planning, member research analysis and facility planning services for private clubs across North America. Bill joined McMahon Group in 1999 and has worked with over 200 clubs helping to solve their strategic and facility needs.

Bill is Co-Editor of Club Trends, a quarterly report published with the National Club Association (NCA). He has written for many private club publications like The BoardRoom Magazine, Club Director and more, and has been a featured speaker at national conferences, local chapters and other associations serving the private club industry. He is also on the NCA’s Communications Committee.

Bill has been instrumental in developing and enhancing the McMahon Group online presence. He created and runs Clubtopia® (www.clubtopia.com) – an online business directory of firms and companies serving the club industry. 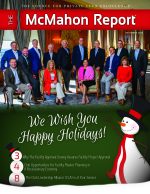